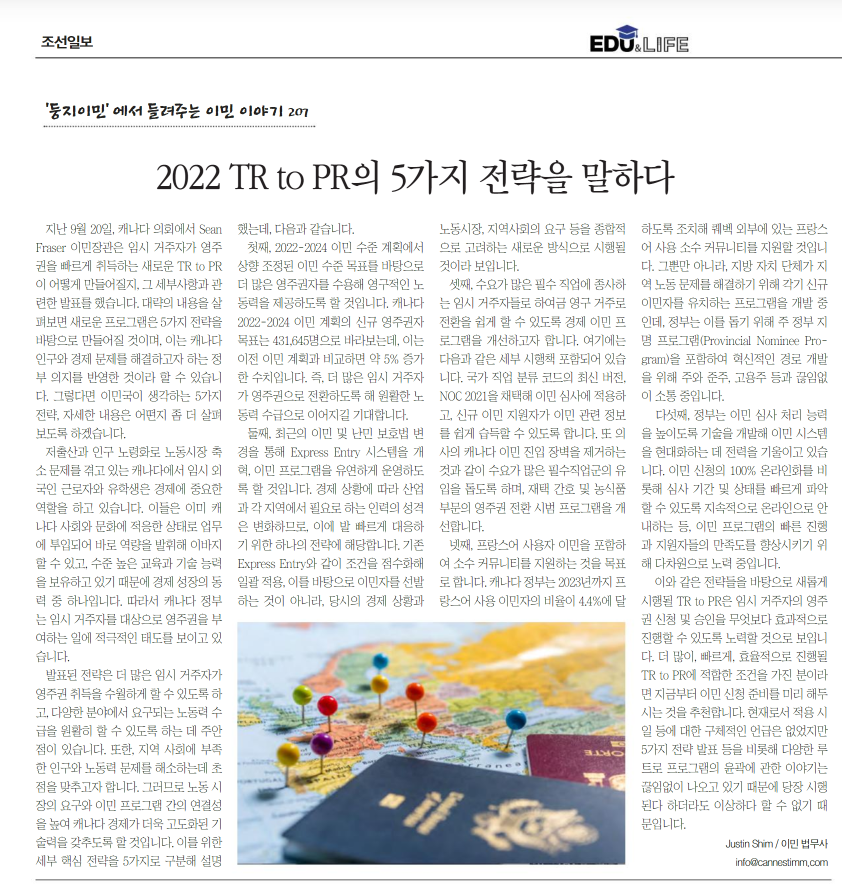 On September 20, in the Canadian Parliament, immigration secretary Sean Fraser said that temporary residents were quick to acquire permanent residency
I made an announcement regarding the details of how the new TR to PR will be made. I'm going to you a rough idea
If you look at it, the new program will be based on five strategies, which are Canadian population and economy
It reflects the government's willingness to solve the problem. Then, what do you think the immigration office is going to do you know?
Let's take a closer look at the five strategies.
Temporary foreign workers in Canada, which is suffering from shrinking labor markets due to low birth rates and aging populations,
International students play an important role in the economy. They've already adapted to Canadian society and culture
Ability to contribute immediately after being put into the job and possess high-quality education and technical skills
So it's one of the engines of economic growth. Therefore, the Canadian government has given permanent residency to temporary residents
He is active in giving things.
The strategy announced makes it easier for more temporary residents to obtain permanent residency and in a variety of areas
The main focus is on facilitating the supply and demand of the required labor force. Also, there is a lack of communities
I want to focus on solving population and labor problems. Therefore, labor market needs and immigration
By increasing the connectivity between programs, the Canadian economy will have more advanced technology. for this purpose
There are five key detailed strategies, which are as follows:
First, based on the immigration level targets raised from the 2022-2024 Immigration Level Plan, more permanent residents will be required
It will accommodate and provide a permanent workforce. New Permanent Resident in Canada 2022-2024 Immigration Scheme
The target is expected to be 431,645, an increase of about 5% over previous immigration plans. That is, more
We hope that many temporary residents will switch to permanent residency, leading to smooth labor supply and demand.
Second, recent changes to the Immigration and Refugee Protection Act have revamped the Express Entry system, creating an immigration program
We will try to operate flexibly. Depending on the economic situation, the nature of the industry and the manpower required by each region
It's changing, so it's a strategy to respond quickly. Just like traditional Express Entry
Instead of scoring conditions and applying them in batches, selecting immigrants based on them, the economic situation at the time and
It will be implemented in a new way that comprehensively considers the labor market and the needs of the community.
Third, temporary residents in highly demanding essential occupations can easily switch to permanent residence
We want to improve our economic immigration program so that we can. This includes the following detailed enforcement measures:
Yes, the latest version of the National Occupational Classification Code, NOC 2021, applies to immigration screening, and new immigration
Make it easy for applicants to learn information about immigration. It also provides a barrier to doctors' entry into Canada
It helps the influx of essential occupations with high demand, such as elimination, in the home care and agri-food sector
Improve the pilot program for permanent residency transition.
Fourth, it aims to support minority communities, including French-speaking immigration. Canada
By 2023, the government has decided to ensure that the percentage of French-speaking immigrants will reach 4.4 percent, which is outside Quebec
We will support the French-speaking minority community. Not only that, but local governments have to deal with local labor problems
To solve the problem, each is developing a program to attract new immigrants, and the government is trying to help the state
States and territories for innovative path development, including the Provincial Nominee Program
I'm constantly communicating with my employer, etc.

Fifth, the government has developed technologies to increase immigration screening and processing capabilities, and is committed to modernizing the immigration system
I'm leaning. Quickly understand the screening period and status, including 100% online immigration applications
The rapid progress of immigration programs and the satisfaction of applicants, such as continuing to guide them online to
I'm trying to improve in many dimensions.
Based on these strategies, the newly implemented TR to PR will apply for and approve permanent residency of temporary residents
Above all, it seems that we will try to proceed effectively. It's going to be more efficient, faster, more efficient
If you have the right conditions for TR to PR, I recommend that you prepare for immigration application from now on.
Currently, there has been no specific mention of the application date, but various routes, including the announcement of five strategies, have been made
The story of the outline of the program is constantly being talked about, so even if it is implemented immediately, it will be strange
Because I can't.