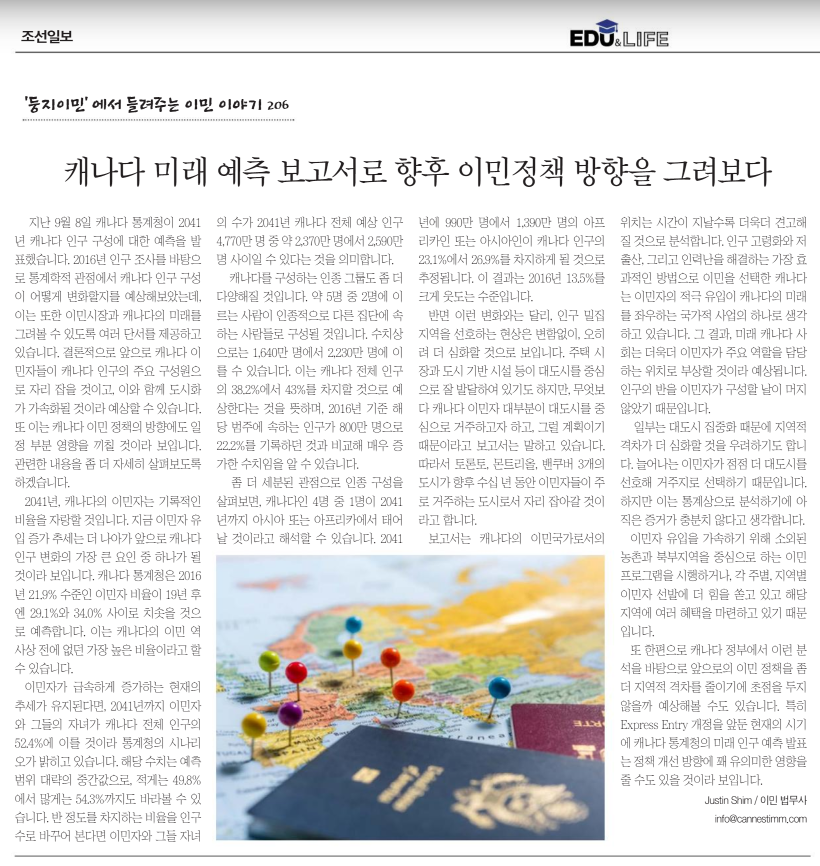 On September 8, Statistics Canada released a forecast for the composition of Canada's population in 2041. Population in 2016
Based on the survey, we predicted how the Canadian population composition would change from a statistical perspective
It also provides a number of clues to help us picture the future of the immigration market and Canada. In conclusion
In the future, Canadian immigrants will become a major member of the Canadian population, along with urbanization
You can expect it to accelerate. And it also has some implications for the direction of Canadian immigration policy
It looks like. Let's take a closer look at what's going on.
In 2041, Canadian immigrants will boast a record rate. The current trend of increasing immigration flows is more
Furthermore, it will be one of the biggest factors in Canada's population change in the future. Statistics Canada said,
The proportion of immigrants, which stood at 21.9% in 2016, is expected to soar between 29.1% and 34.0% in 19 years.
This is the highest rate in Canada's immigration history.
If the current trend of rapidly increasing immigrants continues, immigrants and their children will be able to survive until 2041
Statistics Korea's scenario says it will account for 52.4 percent of Canada's total population. These figures are predicted
At the midpoint of the range, you can see at least 49.8% to 54.3% at most. About half
If you change the percentage of the population to population, the number of immigrants and their children is expected to be Canada's total population in 2041
That means it could be between 23.7 million and 25.9 million out of 47.7 million.
The ethnic groups that make up Canada will also become more diverse. About two out of five people are ethnically involved
It will consist of people who belong to different groups. Figures show 16.4 million to 22.3 million
Yes, that means it is expected to make up 38.2% to 43% of Canada's total population in 2016
The number of people in that category is 8 million, which is a significant increase compared to 22.2%
You can see that.
If you look at race composition from a more detailed point of view, one in four Canadians will be able to see Asia by 2041
It can be interpreted as being born in Africa. 9.9 million to 13.9 million Africans in 2041
Or, it is estimated that Asians will make up 26.9 percent of Canada's population from 23.1 percent. This result is
It is far above 13.5% in 2016.
On the other hand, unlike these changes, the preference for densely populated areas will continue to intensify
You can see that the housing market and urban infrastructure are well developed around big cities, but most of all,
This is because most immigrants from Canada want to live in large cities and plan to do so, the report said
I'm talking. So Toronto, Montreal, and Vancouver are three cities where immigration will be the most important in the next few decades
It will be established as a city where you live.
The report analyzes that Canada's position as an immigrant country will become stronger over time.
Canada, which chose immigration as the most effective way to solve the aging population, the low birth rate, and the labor shortage,
I think that the active influx of immigrants is one of the national projects that determines Canada's future. As a result,
In the future, Canadian society is expected to emerge as a place where immigrants play a major role. population
This is because it is not long before immigrants form a class.
Some worry that the regional gap will widen due to the centralization of large cities. The increasing number of immigrants
This is because they increasingly prefer large cities to live in. But statistically, it's not yet analyzed

I don't think there's enough evidence. In order to accelerate the influx of immigrants, the focus is on marginalized rural and northern areas
It's either implementing immigration programs, or it's focusing more on selecting immigrants from each state and region, and it's a number of different locations
It's because we're offering benefits. And on the other hand, the Canadian government is building on this analysis and moving forward
One might expect that policy will focus more on narrowing regional gaps. Especially Express Entry
The Canadian National Statistical Office's announcement of future population forecasts at this time of revision has been quite significant in the direction of policy improvement
I think it could have an effectively.