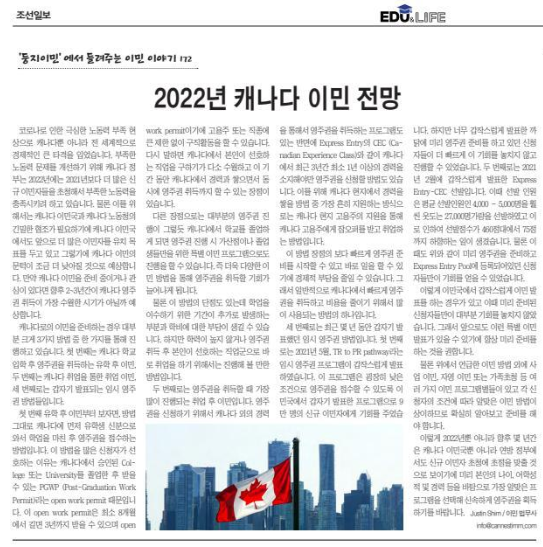 The severe labor shortage caused by COVID-19 has hurt economically not only in Canada but also around the world. In order to improve the shortage of labor, the Canadian government is trying to meet the shortage of labor by inviting more new immigrants in 2022 than 2021. Of course, this requires close cooperation between the Canadian Immigration Service and the Canadian Labor Administration, so the Canadian Immigration Service is also aiming to attract more immigrants in the future, so the threshold for immigration to Canada is expected to be slightly lower. If you are preparing or interested in immigration to Canada, I expect that the next two to three years will be the easiest time to obtain permanent residency in Canada.
Most of the immigration preparations to Canada are carried out in one of the three main ways. The first are immigration after studying abroad to obtain permanent residency after entering a Canadian school, the second are employment immigration through employment in Canada, and the third are temporary permanent residency methods that are suddenly announced.
If you look at immigration after studying abroad for the first time, you can come to Canada as an international student first, complete your studies, and apply for permanent residency. The reason why many applicants prefer this method is because of the open work permit called Post-Grading Work Permit (PGWP), which can be received after graduating from University or College approved in Canada. This open work permit can be received for at least 8 months to 3 years, and since it is an open work permit, you can find a job without much restrictions on employers or occupations. In other words, it is somewhat easier to find a job you prefer in Canada, and during this period, you can gain permanent residency while building your career in Canada.
Other advantages are that if you graduate from school in Canada, as with most permanent residences, you can get additional points or special immigration programs only for graduates. In other words, there will be more opportunities to obtain permanent residency through more diverse immigration methods.
Of course, there are disadvantages of this method, which can lead to additional periods for completing studies and burden of tuition. However, it is a good way to proceed to get a job right away as a job group you prefer after obtaining permanent residency or not having a high education level of education.
The second is post-employment immigration, which is the most common when obtaining permanent residency. While there are programs to obtain permanent residency through careers outside of Canada, you must have at least one year of experience in Canada over the past three years, such as Express Entry's Canadian Experience Class (CEC). To this end, the most common way to build a career in Canada is to get a job offer from a Canadian employer and get a job with the support of a Canadian employer.
The advantage of this method is that you can start preparing for permanent residency faster and work immediately, thereby reducing the economic burden. So it's one of the most commonly used ways to quickly acquire permanent residency and reduce costs in Canada.
The third is the temporary permanent residence method that has been suddenly announced in recent years. First, in May 2021, a temporary permanent residence program called TR to PR pathway was suddenly announced. This program was suddenly announced by the Immigration Bureau to allow people to apply for permanent residency under very low conditions, giving 90,000 new immigrants a chance. However, because of the sudden announcement, applicants who were preparing for permanent residency in advance were able to proceed faster without missing this opportunity. The second is the Express Entry-CEC selection, which was suddenly announced in February 2021. At this time, about 27,000 people were selected, far exceeding the average starting number of 4,000 to 5,000, which resulted in a drop in the starting score from 460 to 75. Of course, at this time, only applicants who prepared their permanent residency in advance and were registered in Express Entry Pool could get the opportunity.
In some cases, immigration offices suddenly announce immigration, and only pre-prepared applicants did not miss the opportunity. Therefore, it is recommended that you always prepare in advance because there may be such special immigration announcements in the future.
Of course, in addition to the above-mentioned immigration methods, there are various immigration programs such as business immigration, self-employed immigration, or family invitation, and the appropriate immigration methods vary depending on the conditions of each applicant, so make sure to find out and prepare.
Not only in 2022 but also in the next few years, the Canadian Immigration Office as well as the federal government are expected to focus on inviting new immigrants, so I hope you choose the most appropriate program based on your age, language performance, and career in advance.