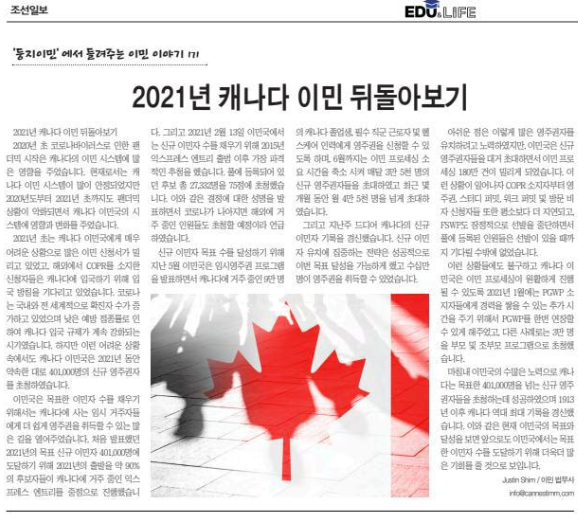 The start of the pandemic caused by the coronavirus in early 2020 has had a great impact on Canada's immigration system. Currently, the Canadian immigration system has stabilized a lot, but from 2020 to early 2021, the pandemic situation worsened, affecting and changing the Canadian immigration office's system.
In early 2021, many immigration applications were being pushed back due to a very difficult situation for the Canadian Immigration Service, and applicants with COPD from abroad were waiting for their entry policy to enter Canada. The number of confirmed cases of COVID-19 was increasing both domestically and globally, and due to the low vaccination rate, regulations on entry into Canada continued to be tightened. However, despite this difficult situation, the Canadian Immigration Service has invited 401,000 new permanent residents as promised during 2021.
The Immigration Bureau has opened many ways for temporary residents living in Canada to obtain permanent residency more easily to meet the target number of immigrants. To reach the first announced 401,000 new immigrants in 2021, about 90% of the candidates started in 2021 focusing on the Express Entry in Canada. And on February 13, 2021, the Immigration Bureau held the most unprecedented lottery since the launch of the Express Entry in 2015 to fill the number of new immigrants. A total of 27,332 candidates registered in the pool were invited to 75 points. He issued a statement on the decision and mentioned that when COVID-19 improves, people living abroad will also be invited.
In May, the Immigration Bureau announced a temporary permanent residency program, allowing 90,000 Canadian graduates, essential workers, and healthcare workers living in Canada to apply for permanent residency, reducing immigration processing time by June, and inviting more than 45,000 new permanent residents per month in recent months. And finally broke Canada's new immigrant record last week. The strategy of focusing on attracting new immigrants has successfully enabled this goal to be achieved and hundreds of thousands of people have been able to acquire permanent residency.
Unfortunately, we tried to attract so many permanent residents, but the immigration office invited a large number of new permanent residents, delaying 1.8 million immigration processes. In this situation, COPD holders, permanent residency, study permits, work permits, and visa applicants were also delayed more than usual, and FSWPs were temporarily suspended, forcing those registered in the pool to wait until the selection.
Despite these situations, the Canadian Immigration Service allowed PGWP holders to extend their PGWP once in January 2021 to give them extra time to build their careers to facilitate immigration processing, and in other cases, 30,000 people were invited to parent and grandparent programs.
Finally, with numerous efforts by the Immigration Bureau, Canada succeeded in inviting more than 401,000 new permanent residents and broke Canada's all-time record since 1913. Looking at the current goals and achievements of the immigration office, it is expected that the immigration office will give more and more opportunities to reach the target number of immigrants in the future.