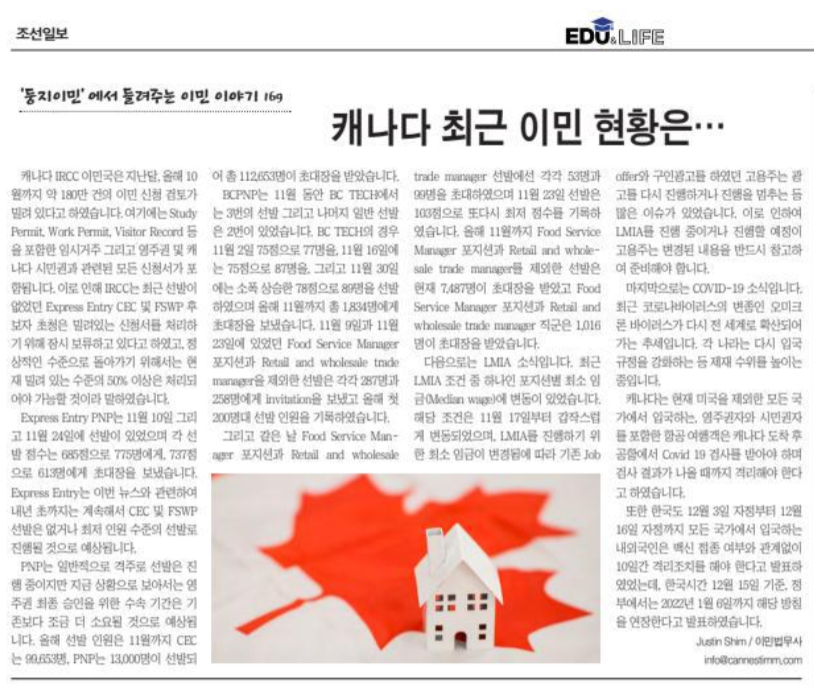 The Canadian IRCC Immigration Bureau said about 1.8 million immigration applications were delayed until October this year.
Temporary residence, including Study Permit, Work Permit, Visitor Record, and permanent residency and Canada.
All applications related to citizenship are included. As a result, IRCC has recently been selected by Express Entry CEC,
The invitation of FSWP candidates is said to be on hold for a while to process the delayed application form, and at a normal level.
He said that more than 50% of the current levels must be processed to return. Express
Entry PNP was selected on November 10 and November 24, with each starting score of 685 points to 775 people.
I sent invitations to 613 people with 737 points. Express Entry will be introduced to you by early next year,
There is no CEC and FSWP selection, or it is expected to proceed with the lowest-level selection. PNP is...
In general, selection is underway every other week, but considering the current situation, the procedure period for final approval of permanent residency is
It is expected to take a little longer than before. Until November, CEC has 99,653 people and PNP has...
13,000 people were selected, and a total of 112,653 people received invitations. BCNPNP has 3 concerts in BCTECH in November.
The selection and the rest of the general selection were No. BC TECH scored 75 points on November 2nd, 77 in November.
On the 16th, 87 people were selected with 75 points, and on November 30, 89 people were selected with 78 points, up slightly.
I sent invitations to a total of 1,834 people by November. Food Service Manager on November 9th and 23rd.
Excluding positions and retail trade managers, 287 and 258 players will be invitational, respectively.
We sent it and recorded the first 200 starters this year. On the same day, Food Service Manager position
53 and 99 people were invited to the Retail trade manager selection, respectively, and the selection on November 23rd was...
He recorded the lowest score again with 103 points. Until November this year, Food Service Manager position and Retail...
Except for the and whoolesale trade manager, 7,487 people have received invitations and Food Service Manager.
1,016 people received invitations for positions and retail trade managers.
Next is LMIA news. Recently, one of the LMIA conditions, the change in the minimum wage by position (median range),
There was. The conditions have changed suddenly since November 17th, and the minimum wage for LMIA has changed.
As the change was made, the employer who had previously advertised for job offer and job openings again or stopped advertising, etc.
There were many issues. As a result, the employer who is planning to proceed with the LMIA changes.
You must refer to it and prepare it.
Lastly, it's COVID-19 news. Recently, the Omicron virus, a strain of coronavirus, has returned to the world.
It's spreading. Each country is raising the level of sanctions by tightening entry regulations again.
In Canada, air travelers, including permanent residents and citizens, who are currently entering all countries except the United States,
After arriving in Canada, you must undergo a COVID-19 test at the airport and quarantine until the test results are released.
We did. Also, Koreans and foreigners entering Korea from midnight on December 3rd to midnight on December 16th are vaccinated.
It was announced that quarantine measures should be taken for 10 days regardless of vaccination, but as of December 15th, Korean time,
The government announced that it would extend the policy until January 6, 2022.